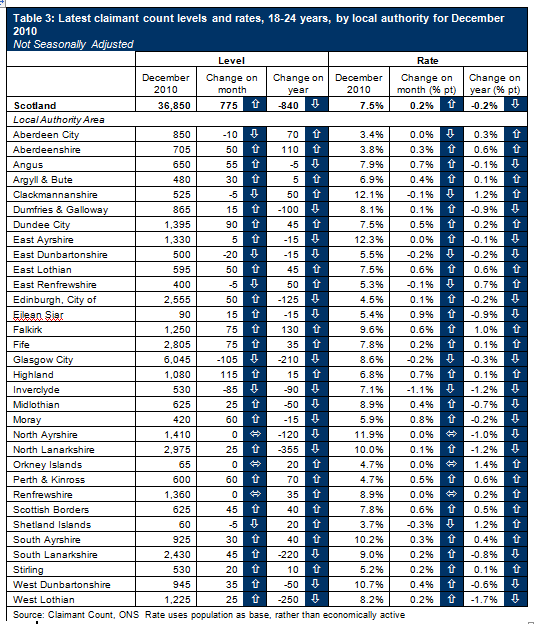 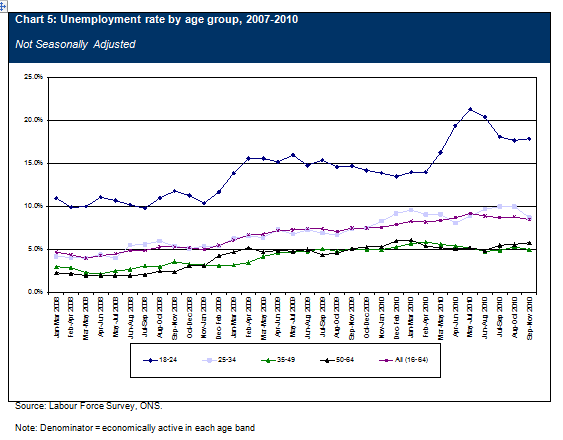 I also saw a very interesting report by David Bell and David Blanchflower looking at unemployment. In this report they take the time to go over the reasons why we should be concerned about unemployment generally and youth unemployment specifically. I thought it was a useful reminder and goes to show just how damaging current economic choices are likely to be.
“The major reasons cited in the literature for why we care about unemployment are as follows:
1)   Because of the lost output involved. During a long period of unemployment, workers can lose their skills, causing a loss of human capital.
2)   Unemployment is a stressful life event that makes people unhappy.
3)   Unemployment increases susceptibility to malnutrition, illness, mental stress, and loss of self-esteem, leading to depression. Goldsmith, Veum and Darity (1996, 1997) found, for example, using data from the NLSY that being jobless injures self-esteem and fosters feelings of externality and helplessness among youths. Moreover, they also found evidence that the psychological imprint of joblessness persists.
4)   Increases in the unemployment rate tend to be associated with increases in the suicide rate. The unemployed appear to have a higher propensity to commit suicide.
5)   Being unemployed can also reduce the life expectancy of workers.
6)   Unemployment increases the probability of poor physical health outcomes such as heart attacks in later life.
7)   The long-term unemployed are at a particular disadvantage trying to find work. The effects of unemployment appear to depend a lot on how long the person has been unemployed for. People's morale sinks as the duration of unemployment rises. Longterm unemployment is especially harmful. "The long-term unemployed have largely given up hope," (Layard, 1986, p.96).
8)   Unemployment while young, especially of long duration, causes permanent scars rather than temporary blemishes.32 For the young a spell of unemployment does not end with that spell; it raises the probability of being unemployed in later years and has a wage penalty. These effects are much larger than for older people.
9)   As unemployment rates increase, crime rates tend to rise, especially property crime. Indeed, there is some recent evidence that property crime has now started to increase in the UK. According to the British Crime Survey for the period July to September 2008, police recorded domestic burglaries rose by four per cent.34 Thornberry and Christensen (1984), for example, find evidence that a cycle develops whereby involvement in crime reduces subsequent employment prospects which then raises the likelihood of participating in crime. Fougere et al (2006) find that increases in youth unemployment causes increases in burglaries, thefts and drug offences. Hansen and Machin (2002) find a statistically significant negative relationship between the number of offences reported by the police over a two year period for property and vehicle crime and the proportion of workers paid beneath the minimum before its introduction. Hence, there are more crime reductions in areas that initially, had more low-wage workers. Falk and Zweimuller (2005) find a significant positive relation between unemployment and right-wing criminal activities. Carmichael and Ward (2001) found in Great Britain that youth unemployment and adult unemployment are both significantly and positively related to burglary, theft, fraud and forgery and total crime rates. For each of these offence categories the relationship between youth unemployment and the specific crime was found to be somewhat stronger. Carmichael and Ward (2000) found that there is a systematic positive relationship between burglary rates and male unemployment regardless of age.
10)               Increases in the unemployment rate, lowers the happiness of everyone, not just the unemployed. The fear of becoming unemployed in the future lowers a person’s subjective wellbeing.”
Helen Martin- STUC
Posted by Scottish Trades Union Congress at 12:48

Email ThisBlogThis!Share to TwitterShare to FacebookShare to Pinterest
Labels: there is a better way, Youth Unemployment