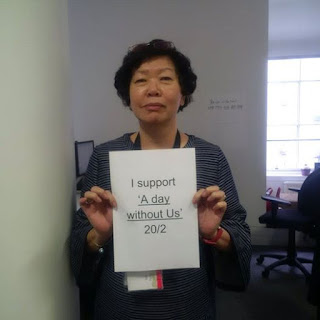 On 22nd Sept 2016, a social media campaign was launched in Egypt by the International Organization for migration: ‘A Day Without Migrants,’.

The aim was to highlight the real and positive impacts that migrants have on the host communities. Matt Carr, a freelance print and radio journalist, has urged migrants and their supporters to join in for a day of action on 20th February 2017 (20/2). He felt that the main triggers for this event were overpowering concern about worsening attitudes to migrants in the UK (Taylor D. (2016) the Guardian).

From the ambiguous idea that some sort of protest should be mounted, it is now taking a life of its own in calling for actions to support migrants’ right across the UK. A Day Without migrants is a National Day of Action on 20th Feb 2017 (20/2) to celebrate the contribution of migrants to the UK, to coincide with UN World Day of Social Justice.

Just imagine for 24 hours, migrants from inside and outside the European Union, and everyone who supports them, celebrate the contribution that migrants make, including a labour boycott to demonstrate how important migrants are to the UK workforce.

The aim of the day of action is to emphasise the varieties of work migrants undertake to help keep the UK economy afloat – from the NHS, to the hospitality sector, to harvesting fruits and vegetables in the fields. The work too often is low paid and involves long hours. The organisers say a day without migrant labour can demonstrate how much the economy would struggle without their contribution.

Who is a migrant?

A migrant is any person living in a country other than where they were born. The number of international migrants in 2015 reached 244 million. (International Migration Report UN 2015). Women comprise slightly less than half of all international migrants worldwide representing 48% of global movement. Most migrants worldwide are of working age. As a result of this faster growth rate, the share of migrants in the total population reached 3.3 per cent in 2015. Many migrants living in Scotland have taken up citizenship.

In spite of the many benefits of migration, migrants themselves remain among the most vulnerable members of society. They often work with no job security on zero hours contracts and are often the first to lose their job in the event of an economic downturn, often working for less pay, for longer hours, and in worse conditions than national workers.

While for many migration is an empowering experience, others endure human rights violations, abuse and discrimination. Migrants, particularly women and children, are too often victims of human trafficking and the heinous forms of exploitation that human trafficking entails. Further, in many parts of the world, migration remains one of the few options for people, particularly young people, to find decent work, provide for their families and escape poverty, persecution and violence.

What are we hoping to achieve?

A few days without migrant workers here could bring life to a halt soon enough. Migrant workers are found in both high skilled and low skilled industries. We can made a quick mental note of many ways on how we all depend on migrant labour: what if there were no au pairs/ cleaners/ house keepers working long hours so that thousands of professional women can get to work early and come home late; no migrants to sweep out the train/bus station concourses and opening their coffee shops before dawn; no cheap foreign contract cleaners in the financial centres/ hotels of the City; no foreign car washers for the executive cars; no overseas carers in the old people's homes; no Polish plumbers to fix the leaks; no Ukrainian builders on the construction sites; no Brazilians in the sandwich shops; no South Africans to pack the supermarket fruit and veg, and lets not talk about the many thousands of consultants, doctors/ GPs, nurses, care assistants and cleaners who work in our NHS helping cover the gaps caused by lack of Government funding. You can go on and on and on……you can create your own list of the debt we all owe to newly arrived workers who make our lives easier (Lawrence F.(2006) the Guardian).

What are we to do on 20/2? Well here is a website with a link to a face book page: http://www.glasgowlive.co.uk/news/glasgow-news/glasgows-migrant-populations-called-take-12007398

We were asked to post a selfie supporting this day and take a day off, if you can and let’s all pause to reflect on the contribution that migrants make to Scotland.