A new deal for women in engineering 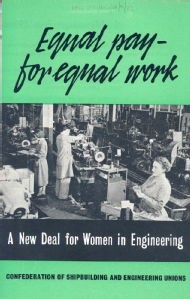 The Second World War saw an influx of women into male dominated professions such as engineering. So much so, that in 1943 the Amalgamated Engineering Union (AEU) took the decision to admit women members for the first time and women have continued to consolidate their position within the sector and within their unions ever since.

Since that time much has changed in the world of work and the issue of gender inequality and occupational segregation in engineering is now widely recognised. We know now that occupational segregation in STEM fields costs the Scottish economy £170milion each year; we know that 73% of women with qualifications in these fields leave the sector, compared to 49% of men and we know that the Scottish Government forecasts the need for 120,000 more engineers by 2020.

Companies are also recognising the benefits of diverse workforces and many are working to create more inclusive cultures. At Equate, we have the good fortune to work with passionate women and men from across the sector who are committed to creating change through flexible-working, taking positive action and challenging structural barriers.

Trade Unions continue to have a key role to play in this work. In recent years, Prospect the Union has taken the lead in championing the needs of women looking to return to science and engineering following a career break. Their research in this area, has resulted in the development of returnship programmes that have enabled talented women to step back onto the career ladder.

Today is International Women in Engineering Day – a day to celebrate the many achievements of women in engineering and also a day to remember that supporting this agenda is the right thing to do both economically and socially. Without women, Scotland cannot meet its STEM sector targets and if we do not work to overcome occupational segregation in these sectors, then we risk locking women out of the jobs of the future.

In order to prevent this, we must all work together. We need engineering employers to take bold action to attract and retain women to and in their organisations. Equally, we need our trade unions to be at the fore front of discussions on gender equality, challenging the status quo and championing change. There is a real opportunity for Unions to lead on these issues, just as Prospect has done, and Equate Scotland looks forward to working with Unions to make this vision for Scotland a reality.

Allison Johnstone started her career as a chemical engineer with the oil and gas industry. She now works as Training and Development Manager at Equate Scotland, the national experts on women in STEM fields. She is member of Unison.

Photograph found at: https://www2.warwick.ac.uk/services/library/mrc/explorefurther/images/ase160/
Posted by Scottish Trades Union Congress at 12:31 No comments:

Why auto-enrolment matters to women

Auto-enrolment is a Government initiative designed to encourage workers to save for their retirement. By 2018 all employers must enrol their eligible employees into a workplace pension scheme and the employers must contribute to it. Employees can opt out if they wish but the reality is very few do. Since its introduction in 2012 over 440,000 workers in Scotland are now saving into a workplace pension as a result of auto-enrolment.

By the time the roll out is complete the majority of workers in Scotland will have access to a workplace pension that will include an employer contribution of at least 3% of salary by April 2019.

The Government review of auto-enrolment is currently taking place however there is no requirement to change anything as a result of this review.

As we are all aware Brexit negotiations will extend well into 2018 and beyond taking up much of the UK’s government’s time, however we can’t allow them to use this as an excuse to stall long term domestic pension policy.
Despite the general consensus that Auto-enrolment has been a success, changes have to be made. It must be made simpler, fairer and open to all. In particular, the review must address the discrimination against the low paid and bring more women and people on low incomes into auto-enrolment.

A major problem with the current approach is that to be eligible you need to earn at least £10k a year in one job. This excludes many part-time workers who have an income over £10k which comes from multiple jobs.
We need action to change the auto-enrolment eligibility criteria so that more women qualify. By bringing together low income multiple jobs –would allow workers with more than one job to benefit from an employer contribution which they currently do not. At the moment these workers are exempt because their earnings are looked at individually rather than combined and they are considered to be below the £10,000 threshold.

Recent figures show that 60,000 women in the UK would immediately benefit if the threshold changed to allow more than one job to be taken into account. Since the financial crash there’s been a massive increase in part-time roles, the majority of which are done by women and government policy on pensions must reflect this.

Widening the scope of AE must be at the heart of the review so that more women can benefit from an employer contribution and start saving.

Women already lose out on pensions in so many other ways. On average their pensions are worth 1/3 less than mens due to lower pay and the earnings threshold on auto-enrolment is yet another contributory factor to the continued widening of the gender pensions gap.

We need a pensions policy that works for everyone.

Posted by Scottish Trades Union Congress at 11:11 No comments: