A very long way to go

The new set of labour market statistics for Scotland published today were pretty unspectacular: in the three months to June unemployment fell by 1,000 and employment increased by 13,000. No new information was published to shed any light on the nature of the new jobs created (pay, full/part time, temporary/permanent, involuntary part-time/permanent). Nevertheless, the political response was predictably Panglossian.

Here's a quick attempt to put the figures into some kind of context. Whilst my preference would be to consider the absolute state of the Scottish labour market I've included the UK as a comparator. After all it seems the performance of Scotland's labour market is only taken seriously when compared to the UK as a whole. 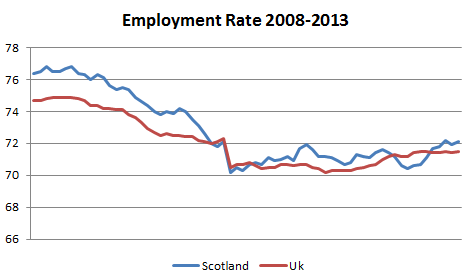 Putting aside for a moment all issues of nature of work created, it's certainly true that Scotland's employment rate is currently increasing at a faster rate than the UK's but over the past year performance has been remarkably similar: the employment rate for Scotland has increased by 0.5% and the UK's by 0.4%.

The salient point is that the current employment rate is still 4.7% below its pre-recession peak and only 1.7% above the trough of summer 2010.

What about the unemployment rate? 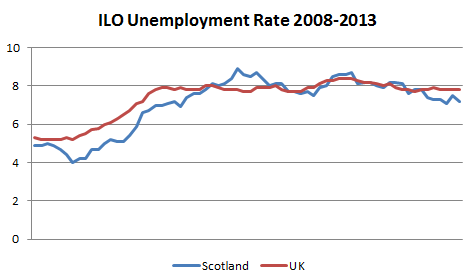 So Scotland's labour market might be improving but there is a very long way to go before pre-recession rates of employment and unemployment are attained. Comparisons with the UK as a whole are inevitable but can be somewhat misleading and, I would suggest, are a bit risky for the Scottish Government. Scotland is currently doing better on both measures but it's not long since the opposite was true. Given the volatility in the Scottish rate relative to the UK it would not be at all surprising if performance didn't flip again in the near future.


Posted by Scottish Trades Union Congress at 21:12 No comments: