Fly the Rainbow Flag! Solidarity for LGBT people around the Commonwealth

The Commonwealth Games are coming to Glasgow. In just 27 days we will all be sitting down to enjoy the opening ceremony and looking forward to watching what is sure to be another great sporting event.

It's right that everyone in Scotland, and Glasgow in particular, should take pride in our Games and should welcome with enthusiasm the athletes and visitors to our country, but while enjoying the occasion we should also not forget some of the issues that still exist around the Commonwealth and we should aim to project a positive image of Scottish values around the world. 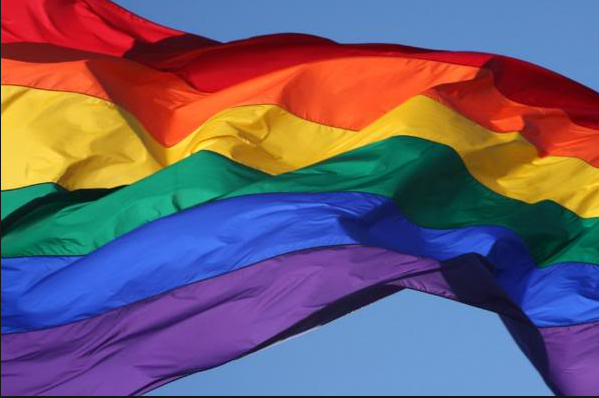 It is in this spirit that the STUC is planning to fly the rainbow flag on our buildings throughout the Commonwealth Games and we are asking trade unions, employers and individuals to do the same.

By flying the rainbow flag we are recognising the Human Rights of LGBT people and celebrating the distance that Scotland has come in promoting equality for this group of people. But we are also rejecting the anti-homosexuality laws that still exist in 80% of Commonwealth countries and we are showing solidarity with the fight for Human Rights that is still being fought by LGBT people across the Commonwealth.

Why the Rainbow Flag?

The Commonwealth accounts for 30% of the world’s population. Unfortunately it has shown a stubborn refusal to recognise or protect the Human Rights of its LGBT citizens.

Penalties under anti-homosexuality laws across the Commonwealth include: 10 years imprisonment and hard labour in Jamaica; 14 years in Kenya; 20 years plus flogging in Malaysia; and 25 years in Trinidad and Tobago. Bangladesh, Barbados, Guyana, Pakistan, Sierra Leone, Uganda and Tanzania have a maximum sentence of life imprisonment, while in the 12 northern states of Nigeria the maximum penalty for male homosexuality is death.

While these laws are not always enforced, they actively create a negative and hostile environment for LGBT people who often feel like second-class citizens. They also contribute to a wider culture of abuse, harassment and degrading treatment that continues unchecked in many countries across the Commonwealth.

In Uganda the Anti-Homosexuality Act was signed into law on 24th February 2014. This Act greatly expands the range of same-sex sexual activities that are punishable by life imprisonment, including “touching with the intention” of committing homosexual acts. It also criminalises ‘promoting homosexuality’, effectively criminalising care and counselling and discouraging assembly and advocacy by Human Rights groups, NGOs and Trade Unions. Any organisation trying to work with LGBT people, will risk losing its license and individuals found guilty of ‘promotion’ face five to seven years in jail.

It is against this back-drop of criminalisation and widespread abuse of LGBT people across the Commonwealth that the STUC is running its campaign. By flying the rainbow flag we are rejecting these laws but we are also offering a symbol of hope and solidarity to LGBT people.

Join us by flying the rainbow flag in your own home or office building. The greater the visibility of the campaign the greater a symbol of hope the Glasgow Games can be.

STUC Highlands and Islands Conference 2014
View more presentations or Upload your own.
Posted by Scottish Trades Union Congress at 14:26 No comments:

The First Minister will today set out his plans for reindustrialising Scotland. Reading between the lines of last week's Sunday Herald report and listening to this morning's radio coverage it doesn't appear as if the Scottish Government paper being published today will include a great deal that wasn't already been signalled in the White Paper.

Anyway, I think I've said all I want to say on the subject of industrial policy/manufacturing and constitutional change (see here, here and here).

But I thought it might be helpful to set out the scale of the challenge that awaits. Although we hear lots about the sector's strengthening recovery, manufacturing output remains 5% below pre-recession levels and in Scotland its recovery is being sustained by only two sub-sectors: food and drink (including of course whisky) and transport equipment (just less than 1/4 of the size of food and drink). 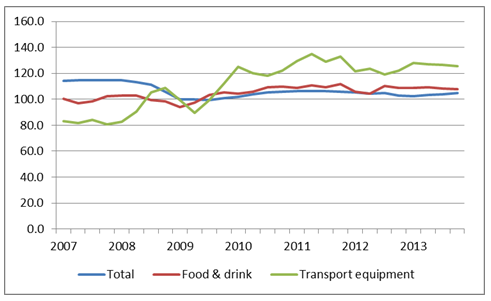 All the other sub-sectors remain well below pre-recession output levels and, worryingly, some continue to decline. 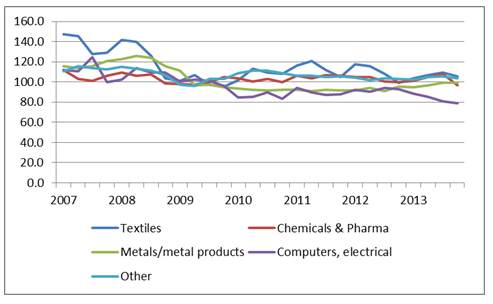 Now anyone arguing that this failure to 'reindustrialise' or 'rebalance' is all the fault of the Scottish Government is living in cloud cuckoo land: much more relevant are the UK's longstanding structural problems that work against manufacturing (see above links) and, crucially, weakness in key export markets. But therein lies the rub: unless under any constitutional scenario policy is targeted at these structural problems (it isn't currently) and global demand is strong, domestic policy is unlikely to make much difference. Even if policy does improve, the outcomes will be long-term and highly uncertain.

No reason not to do it and I wait with great anticipation to hear the detail of what is being proposed today. As the STUC has regularly stated it's a very good thing that politicians at all levels are taking an interest in manufacturing again. But placing incredibly speculative figures on the supposed per capita financial benefits really isn't helpful. Nor is the use of those silly tropes ('levers', 'blueprints') so beloved of Government which seek to give a veneer of mechanical certainty to the outcomes of long-term economic development policy.


Posted by Scottish Trades Union Congress at 09:30 No comments: