The STUC today wrote an open letter to all Lib Dem MSPs and MPs in Scotland. Their conference begins tomorrow in Liverpool and we hope that Scottish Liberal Democrats will join us in rejecting calls by George Osborne and Nick Clegg to remove an additional £4 billion on top of the £11 billion that they have already taken out of the welfare budget.
In our letter we condemn Nick Clegg’s comments that welfare payments should be “an engine of mobility...rather than a giant cheque written by the state to compensate the poor for their predicament," and we make the point that with long-term unemployment on the rise there simply aren’t enough jobs to go around.
Here is an extract from our letter:
STUC is receiving a very clear message from its own members particularly its disabled members, not to mention our sister organisations in the Scottish Campaign on Welfare Reform. People are becoming increasingly fearful for their futures and increasingly angry as it is insisted ‘that more people must find work’ when so little is being done to tackle unemployment.  Figures released this week by STUC showed a 132% increase in long-term unemployment across Scotland with the highest regional increase of 475% being recorded in the Scottish Secretary’s own constituency.
It remains the fact that benefit payments in the UK are low compared to most other countries, income inequality is stubbornly high and work is not the automatic route out of poverty that it should be with the incidence of working family child poverty on the increase.
Two thirds of the UK welfare budget goes to those above working age, with just one third being spent on those of working age and children.   Whilst fully supporting the pledge to safeguard elderly benefits, STUC is horrified to contemplate the cuts that will be borne by the others.
The letter ends by calling on Scottish Liberal Democrats to join us in our Better Way campaign in order to ‘buttress the most draconian attack on welfare in a generation.’
Along with the open letter the STUC also unveiled its campaign banner which is a humorous depiction of the respective roles of David Cameron and Nick Clegg. The banner is currently hanging on the outside of the STUC building and is designed to raise awareness of the Better Way Campaign and challenge the myth that there is no alternative to the Government’s cuts. 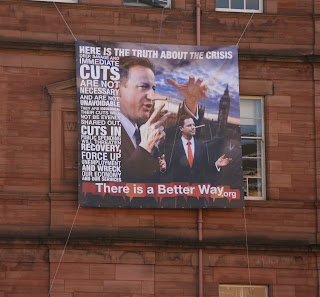