Get out! The Roof is falling in! The UK is the next Greece after all!!

Evidence? Check the graph below which shows the rise in benchmark 10 year gilt yields over the month to 8 December – remember, higher bond yields increase the cost of financing the government’s new borrowing and of refinancing its maturing debt.

An 18% increase over the month is hardly insignificant. Therefore, it is somewhat strange that we haven’t been hearing about this in the press. Can you imagine how an 18% monthly increase would have been reported prior to the election?! It would have been taken as proof that the had joined peripheral eurozone nations in genuine crisis mode.
However, this blog’s headline is deliberately ironic; the story is always more complex and the is not the only major economy to have seen its yields rise over the past month. Indeed, others have seen bigger rises:   US up by 28% to 3.274; Germany up by 27% to 3.032 and japan up by 29% to 1.234. 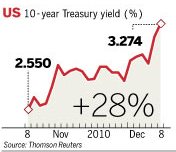 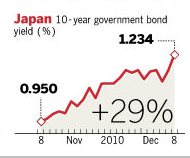 What do we conclude from all this? Does the rise in yields signal imminent fiscal crisis? Does the lower rise in the relative to other major economies indicate that the Government is right to pursue its austerity plans?
As usual, the data can be - and is - used to support a number of different and contradictory positions. And it would be silly to read the apparently coordinated rises across major economies as indicative of a coherent global narrative. German yields have risen as worries have grown over its potential exposure to eurozone bailouts. Rising US and UK yields are probably due to a number of factors: investors, who traditionally lower risk at this time of year are also concluding that gilts were overpriced compared to stocks (stocks have risen as gilt yields have fallen); some data (particularly manufacturing surveys) indicating that the recovery might be growing in strength (note: growing in strength does not = strong) - a stronger recovery might encourage central banks to consider interest rate rises earlier than anticipated; there are undoubtedly some concerns in the US about the long-term fiscal position which has just been worsened by the decision to extend the Bush tax cuts.  Next month the yield may move up or down for an entirely different set of reasons. Of course, the STUC continues to believe that the medium term threat to stable public finances will come from the low revenues and high costs associated with a prolonged period of low growth and high unemployment. We shall see.
In these times of great uncertainty, it would be overly ambitious to draw definitive conclusions from one month’s rise in bond yields and it is important to remember that yields remain low by historical standards and in comparison to genuine crisis countries: Greek yields are pushing 12% and Irish are at 8%.

The point of this blog is to highlight how short-term shifts in gilt prices can be used to mislead. The proposition that the UK fiscal position has deteriorated significantly over the last month can suddenly appear plausible when a graph showing rising gilt yields is produced in evidence – all the more so when historical and international comparisons are omitted.
Few people have the time, inclination and wherewithal to interrogate the validity of such arguments. Indeed, a substantial proportion will assume that this technical, and to most people obscure, information must be sufficient to support the argument. ConDem tactics have relied heavily on the public being generally ignorant and/or disinterested in issues which they find complex and boring. Sticking to the simple narrative which usually involves comparing the national economy to an over-indebted household has served them well; it may be nonsense in economic terms but the majority of people appear to find it plausible.
I guess the lessons are:
Stephen Boyd
STUC
Posted by Scottish Trades Union Congress at 12:26