Has youth unemployment fallen by a third?

The latest labour market statistics for Scotland (see table HI11)) published on 17 April were undoubtedly the most positive for some months: unemployment fell (slightly), employment rose (considerably) and inactivity fell (slightly). At FMQs the following day, the First Minister quite properly emphasized the good news, taking care to stress that ‘over the last year youth unemployment has declined by a third’.


Given that total unemployment has fallen by only 10% over the same period, the decline in youth unemployment would indeed be remarkable if accurate. But is it? Well, not unusually for labour market statistics, the picture is somewhat complex...


The claim that youth unemployment fell by a third in Scotland over the past year is based on statistics published separately from the headline employment, unemployment and activity statistics that usually determine the course of political debate. These figures do indeed show Scotland outperforming the rest of the UK to a significant degree (albeit that a fall of 31% doesn’t quite meet the stretching technical definition of ‘one third’!): 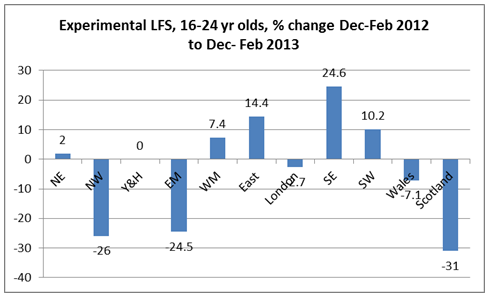 Before anyone is tempted to scream foul, it should be noted that the designation ‘experimental’ doesn’t necessarily render the statistics invalid. ONS concerns may well relate to other nations/regions of the UK with a smaller sample size than Scotland.
OK, so let’s assume that the Scottish statistics are correct. They should at least broadly align with other measures of unemployment; measures that the Scottish Government’s own briefings confirm as more reliable than the experimental LFS figures.
The Scottish Government’s youth unemployment statistical briefings present the experimental LFS data accompanied by data drawn from the Annual Population Survey which it informs us is ‘based on a larger sample than the quarterly LFS information and provides a more reliable estimate of economic activity by age for Scotland’. What do APS data show? An encouraging fall in youth unemployment but well short of the one-third claimed by the FM and much more in line with the total fall in unemployment (all ages) over this period: 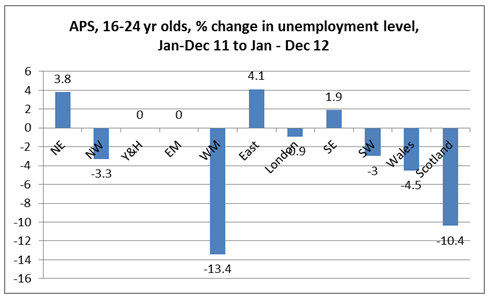 The following chart is derived from the Scottish Government’s latest briefing (April 2013 - see previous link) and shows the change in the APS and experimental LFS rates over the latest year for which data are available: 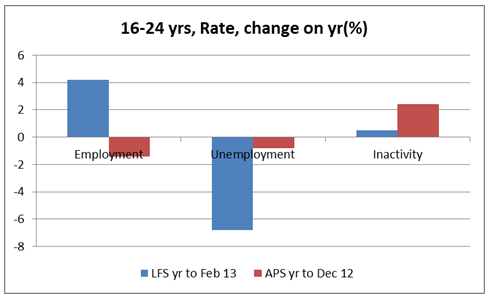 Clearly the performance of this cohort is much less impressive on the APS measure: a much smaller fall in unemployment, a fall in employment and a significant rise in inactivity. Again, this performance is much more in line with the labour market as a whole. However, the APS data lags the LFS data – so perhaps a big fall in youth unemployment occurred at the start of 2013?
If so, it’s reasonable to expect that this would be reflected to at least some extent in the claimant count (JSA) which is the most up to date and reliable measure (although obviously narrower as it only includes those on JSA – LFS and APS includes all those unemployed, seeking and able to start, work) given that it is drawn directly from the Jobcentre Plus administrative system. What’s happening in the claimant count? 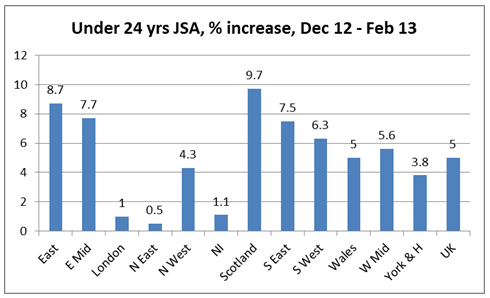 JSA is actually increasing over the recent period and Scotland has seen a bigger increase than any other nation/region of the UK. However, the latest month for which we have figures seen all nations/regions of the UK experience a fall in youth JSA – Scotland’s fall is below the average for the UK but not by a huge margin - but not of a sufficient scale to see a return even to late 2012 levels: 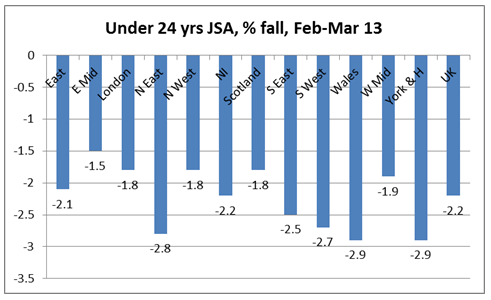 It’s definitely worth stressing that over the year youth JSA has seen an encouraging fall but, again, this is much more in line with the APS youth data and total fall in unemployment than it is with the experimental LFS data: 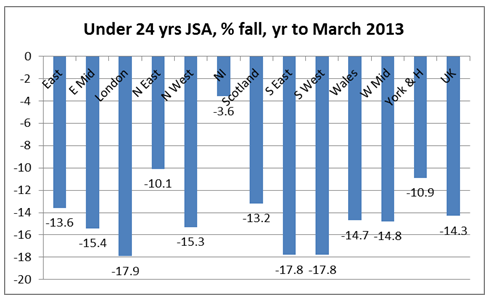 It might also be helpful to look more closely at how the experimental LFS data tracks the rest of the labour market. The following graph shows the change in the headline LFS unemployment rate for all workers (16yrs and over) and the rate for the experimental data for 16-24yr olds; the disparity is particulary marked in some nations/regions including Scotland: 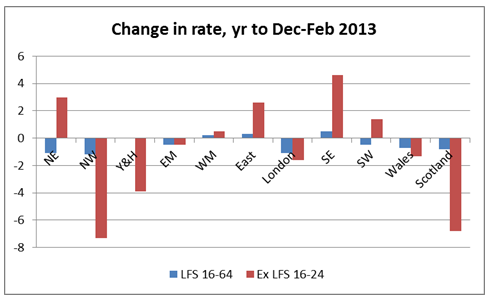 One other area deserves further examination: the 16-24 experimental figures are broken down into 16/17 yr olds and 18-24 year olds. The trends for the two cohorts could hardly be more different over the last year. Scotland has performed exceptionally well on the 18-24 measure; witnessing a massive fall in unemployment of 43.7%: 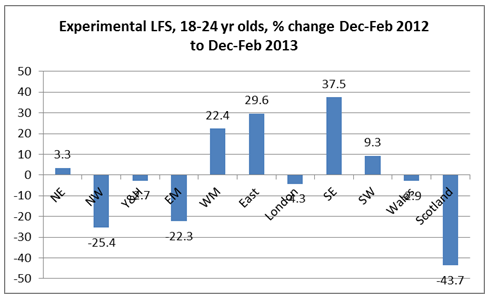 However the opposite is true for 16 & 17 year olds for whom the increase in unemployment has been much, much higher in Scotland than anywhere else in the UK: 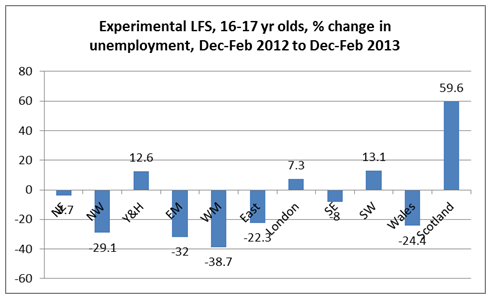 If, as FM argues, devolved policy is the reason 16-24 year old unemployment is falling more rapidly in Scotland then it’s surely reasonable to assume that devolved policy is miserably failing 16 & 17 year olds? Or maybe the experimental data are not so credible after all?
To summarise, the ONS experimental LFS data do indeed show a near one-third decline in Scottish youth unemployment over the past year. However neither the APS or claimant count data provide evidence to support the proposition that youth unemployment fell by a third. Rather, it seems there was indeed a reassuring fall in youth unemployment but of a significantly smaller scale. If the experimental data are credible then some serious questions need to be asked about what is happening with 16 & 17 year olds and some immediate evaluation undertaken to identify exactly what Scotland is doing with 18-24s that is so fabulously successful.
Of course, underemployment is also hitting young people particularly badly but that is a story for another day...
Update: 2100 9 May 2013
This blog was the subject of a short exchange today in Parliament between Ken Mackintosh, Shadow Cabinet Secretary for Finance and Angela Constance, Minister for Youth Employment. Here it is, Mr Mackintosh first: