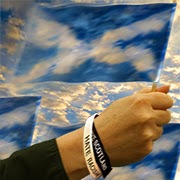 The world is watching
Scotland has a proud history of providing hope and safety to people seeking sanctuary. Men, women and children fleeing war, terror, torture and other atrocities have rebuilt their lives and raised their families here.

These ‘new Scots’ seek in Scotland a place where human rights and human dignity are respected. A place where difference – whether in ethnicity, sexuality, political or religious beliefs – is accepted and valued.

Next summer Scotland will welcome thousands of athletes and visitors to the Commonwealth Games in Glasgow. With the world watching the Games, we have an opportunity to show the world this vision of Scotland – a country of diverse, vibrant communities; a country that protects the vulnerable and welcomes new Scots and celebrates the talents and skills they bring.

But we know that this is not always the reality in Scotland. While we welcome the news that hate crime in Scotland has decreased, even one such incident is one too many. We know that racially motivated crime makes up over two thirds of hate crime charges raised in Scotland. We must continue to work to rid our country of any form of discrimination, and look for further opportunities to break down barriers between people across racial divides.

Many refugees in Scotland come from Commonwealth countries where human rights abuses are common. Many have been persecuted for their religious or political beliefs. Others have been tortured or suffered other violations of their human rights because of their sexuality. Many more have fled terror and violence based on ethnic divisions. As we help these new Scots rebuild their lives and raise their children here, we must remember the atrocities faced by people around the world and work towards building a country where everyone feels safe and welcome