Is youth unemployment at a 10 year low?

On Sunday's Marr Show (at 37.00 mins), Nicola Sturgeon, First Minister stated that "youth unemployment is at its lowest level in a decade". If true, this is surely good news. People worry about youth unemployment for very good reasons. Like all varieties of unemployment, it is a terrible waste of resources for the country as a whole and expensive to the public purse. Periods of unemployment, particularly if prolonged, do significant damage to a young person's future life chances. There is a duty therefore on politicians of all stripes to ensure interventions on the subject are evidence-based and precise.

So is the First Minister correct? Well, she referred to the 'level' not the rate of youth unemployment so let's start with the latest (published 16 September) numbers drawn from the Annual Population Survey: 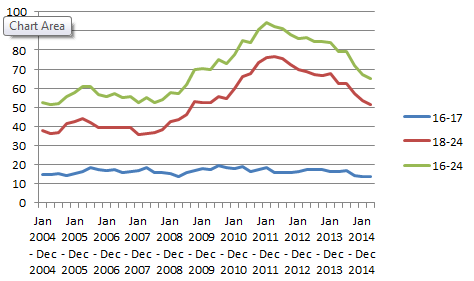 However, focusing on the level (i.e. the number of young people unemployed) isn't very illuminating. If for the sake of argument the economically active population aged 18-24 had doubled over the decade then a figure of 51,000 would represent a very decent outcome (i.e. a much lower rate) . So it makes sense to look at the rate: 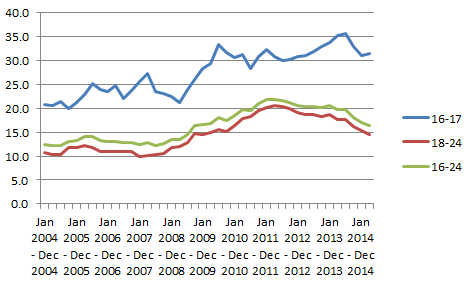 The above measures are based on the Annual Population Survey which are the most reliable statistics available for employment/unemployment/inactivity by age in Scotland. The APS is based on a sample size four times larger than the Labour Force Survey from which the headline figures we hear discussed each month are drawn. However, ONS also publishes an 'experimental' series of data on employment and unemployment by age. This series has the advantage of being more up-to-date (the latest figures cover the May-July 2015 period) but ONS are careful to apply the following strong caveat: "These estimates are derived from the same data source as the headline figures, but due to the relatively small samples sizes and subsequent sampling variability, the figures should be used with caution and are designated as experimental statistics".

The STUC has in the past taken issue with the Scottish Government using these statistics whilst failing to note the caveat. But do the experimental statistics support the proposition that youth unemployment is at its lowest level in a decade? 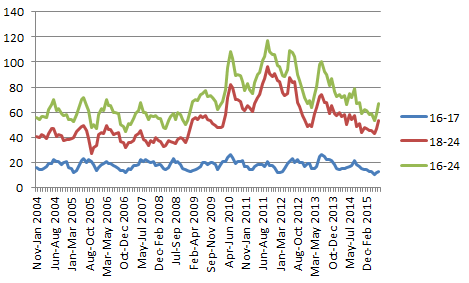 Even on this measure, 18-24 years unemployment is currently higher than it was a decade ago (54,000 compared to 47,000). However, this is a more volatile series and the number of 18-24 year olds unemployed increased by 9,000 between March-May 2015 and May-July. So if the First Minister had been speaking to Marr before the latest statistics were published on 16 September, her statement would have been technically correct on this measure. Perhaps the error is simply attributable to a short lag in updating official advice/Ministerial lines.

What does the unemployment rate from the experimental series reveal? 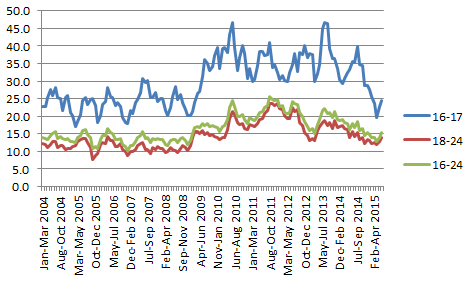 The current 18-24 rate of 14% compares to a rate of 12.9% exactly a decade ago. However, as with the level above, the rate did drop to 11.8% earlier this year. So, again, it would have been technically accurate to argue before the latest statistics were published in September that youth unemployment on this measure was lower than a decade ago.

It would have been possible but to have done so would have been more than a bit mischievous. As the charts above show, both the level and the rate fell during the period between 2004 and 2007 hitting lows of 32,000 and 8.8% respectively in Nov-Jan 2007. Surely a more accurate gauge of progress is to compare current performance against pre-recession peaks/troughs not an entirely arbitrary time period of a decade?

So what more do we know about young people in the labour market in Scotland in 2015? 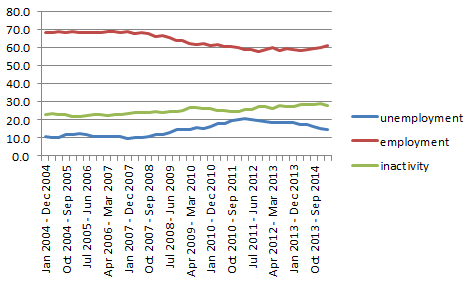 The gradual fall in unemployment since 2012 is mainly attributable to rising inactivity; the increase in employment has been extremely slow although the very latest statistics - not yet sufficient to show a clear trend - are more encouraging. If the rising numbers of inactive young people simply reflect more entering full-time education then this it is clearly not a trend to fret about unduly. If however more young people are simply leaving the labour market altogether and not engaging in education or training then the Scottish Government - and the rest of us - should be extremely concerned. 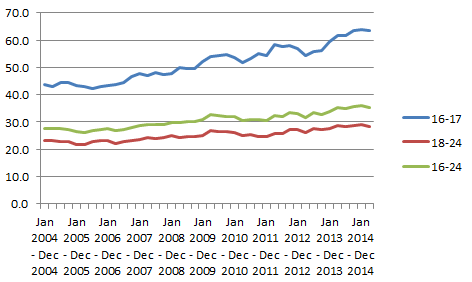 The huge leap in the 16-17 year olds inactivity rate almost certainly reflects the higher numbers staying on at school. We know that the number of 16-19 years olds not in education, employment or training has fallen significantly over the last decade. Of more concern is the 18-24 years group. Rising inactivity might simply reflect higher numbers in full-time education (and not looking for a job) but I'm unaware of official statistics we can draw on here.

But the slow increase in employment is a concern. It is unambiguously the case that fewer young people are in work than a decade ago whilst the employment rate for the over 50s has increased significantly. There is a worry that young people are being squeezed out of entry level jobs. We also know that young people are much more likely to be on a zero hour contract or paid less than the national minimum wage or the living wage. The under-25s will not benefit from the introduction of the 'National Living Wage'.

In conclusion, the First Minister was incorrect to state that youth unemployment is lower than a decade ago although it is certainly possible that, when the new statistics are published tomorrow, this may become true. My concern is that by focusing only on unemployment, and being guilty of using what at best are incomplete and out of date statistics, the First Minister is in danger of leaving the impression that young people's situation in the Scottish labour market is improving much more rapidly than is the case. One day politicians may start using labour market statistics with due care and precision. We're not there yet.